The Solar Cycle and the role of Sun Spots explained

Sunspots and the Solar Cycle explained 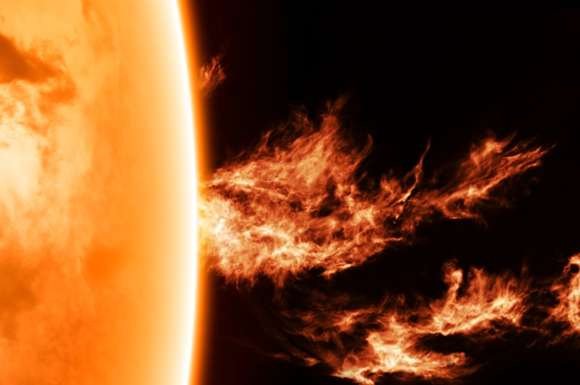 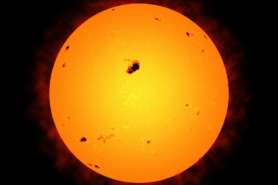 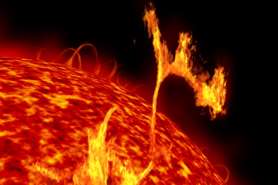 The darker coloured spots on the sun are Sunspots – areas on the sun where there is magnetic activity causing the intense heat surrounding the sunspot. Think of it as an inverted volcano, caused by magnetic polarity changes,  where the interior (the dark spot) is cooling magma whilst surrounding this is intense activity that boils and bubbles and very often erupts in spouts of flames, thrusting material from the sun out in to space.

It takes roughly two weeks for the earth to receive the heat and energy from these spots as the sun revolves, spitting out this energy which causes the Aurora Borealis; it is like a revolving leaking hose (ball shaped obviously) that consistently frees energy into the atmosphere with occasional sun flares pushing extra, huge amounts of energy out.

The more sunspots there are, the more activity there is, and every 11 years or so there is an increase in the amount of sunspots until the peak, which is called the Solar maximum, this then gradually subsides to the solar minimum, and so on in a cycle.

The increase is caused by the polarity of the sun changing – this huge electrically charged mass of seething hot hydrogen and other gases swops northern and southern electrical poles around and this causes the sun’s polarity to weaken and then disappear. The solar polarity then reappears in the reverse format.

The period of the solar maximum can cause electrical disruptions and satellite and communications problems due to the intense radiation storms that are produced that collide with the outer atmospheres of earth where our satellites rotate and these geomagnetic storms can last several days. These violent storms sometimes mean that the Northern lights can be seen as far south as Scotland in the United Kingdom.

The period of the solar maximum can cause electrical disruptions and satellite and communications problems due to the intense radiation storms that are produced that collide with the outer atmospheres of earth where our satellites rotate and these geomagnetic storms can last several days. These violent storms sometimes mean that the Northern lights can be seen as far south as Scotland in the United Kingdom.

Scientists believe that the solar activity definitely affects the earth’s weather and there is evidence that the solar maximum causes fiercer storms like the cyclones. It is also thought that the solar cycle is connected in some way to global and regional climate change, where a prolonged solar minimum is thought to have caused the ice age.

In summary the more sunspots the higher the chances of you seeing the Northern Lights!

However, at the time of writing (2019) we are in a Solar minimum meaning that we are the low end of solar activity. However we are still seeing spectacular Northern lights at the Arctic circle because of the substorm effect – this is caused by electrical disturbances in the magnetosphere near to Earth, or various other unstable elements caused originally by sunspots. Research into this field is still ongoing and we do not fully understand the causes but know that the Northern Lights will only appear closer to the poles during a solar minimum and we know that we can still get superb Northern lights even if it means that we have to go further north to see them.