Visiting the Fagradalsfjal eruption on a Iceland Trip

I was overly-excited as I flew to Iceland to experience the top thing on my bucket list which was a volcanic eruption. It had been a stressful time leading up to this Iceland trip. The eruption started whilst the UK was in lockdown on 19th March 2020 and travel abroad was illegal.

I was beside myself! Here was my once in a lifetime opportunity to see an eruption, relatively close by (Europe rather than in the Pacific somewhere), and be able to get up close to it as it was effusive rather than explosive which means the lava runs rather than explodes, and I knew people who could safely get me there, and it was illegal to go! My local partner in Iceland was sending me photos daily of having visited on his dune buggies, of his kids beside the eruption, of yet another incredible video. It was torture!

Finally the UK travel restrictions lifted enough for us to be allowed to go to a Green listed country which Iceland was. However Iceland wanted proof of vaccination so I had to wait for my second vaccination and then a further 5 days for the letter to be sent through. Every day I became more anxious expecting the eruption to just stop. Every day I checked and it was still going. My NHS Covid letter came through at which point I realised it was politic of me to wait another week for my husband (who was exactly a week behind me on the vaccination timeline). Then our teenage daughter wanted to come on the Iceland Holiday, but we had to wait for her GCSE exams to finish. By the time we actually got to go I was a wreck!

So flying in and seeing from the right hand side of the plane a plume of smoke and vapour which the pilot announced was the eruption was a moment of pure joy and relief. Thank goodness it was still going! The joy was short lived though as the next day it was not possible to go as the lava flow had changed course and had flowed straight over the path, and so access was shut whilst another track was “built”. We explored Helicopter trip options as a way to see it but the weather was wet and windy and the wait-list as a result of all the flight cancellations was huge. 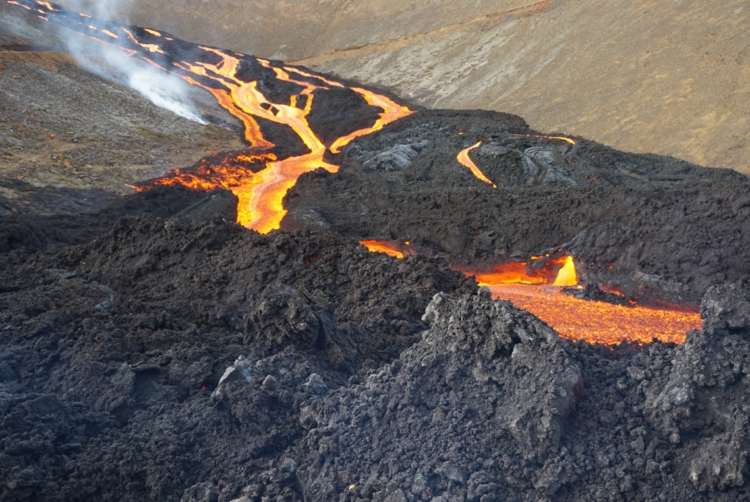 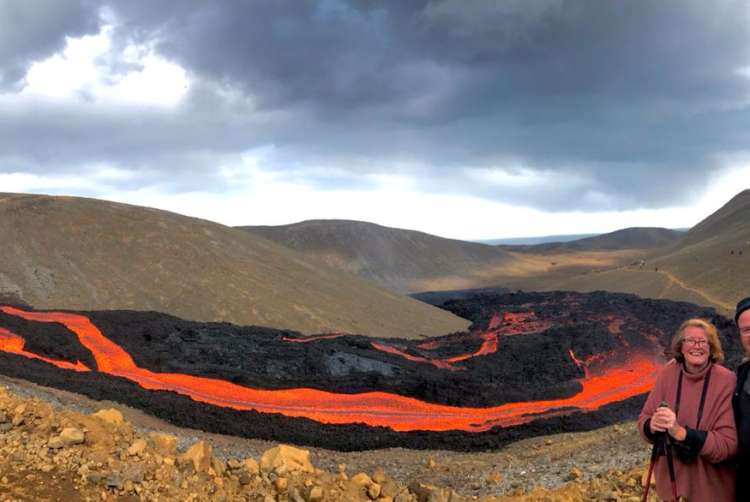 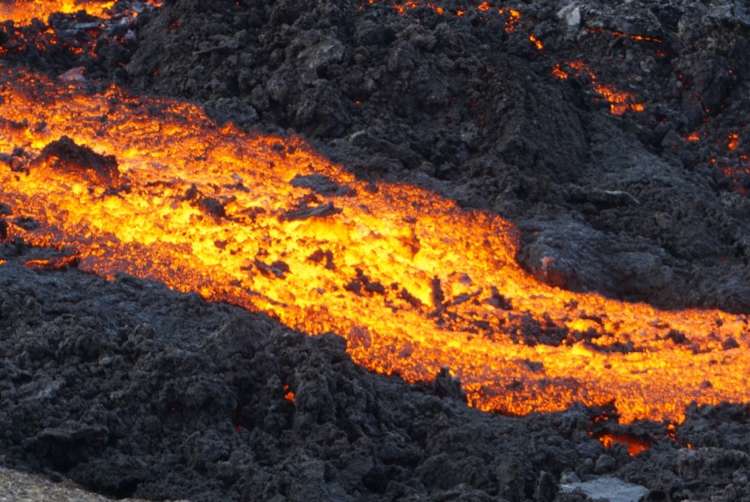 A nervous wait followed the whole of the next day until about 6pm when our guides announced we could go! Luckily it was June and at the peak of the midnight sun so it was still pure daylight, and by now the sun was shining brightly. In the meantime the Icelanders had got a digger up there somehow and had managed to carve a rough track out of the land. Impressive stuff.

I’m not the most fittest and so my husband, daughter, and sister who had also joined us from America, quickly shot into the distance whilst I trudged along at the back. I knew I would make it, it was just a case of plodding along steadily and slowly up the gravel track up. The guide tried to talk to me and I asked him to just let me get on with it by myself. Bless him he stayed with me the whole way in silence, and at one point told me to look up. I answered saying I wasn’t looking up till I got there. He again told me to look up and THERE IT WAS! Streams of orange lava flowing over the hillside off to my left right in-front of me. I couldn’t believe it! My pace certainly picked up after that!

The lava was spectacular. It flowed like a river gushing past us. I never expected to be able to hear Lava but it sounded like a river with crackling as well. The heat was tremendous and the Icelanders thought we were nuts to go as close as we did (Not from a safety perspective, but from the experience of feeling the heat). We walked up the path right up to where it had previously crossed over the path and just watched mesmerised as it bubbled and crackled past. In the distance we could hear booms which we were told were gas explosions actually in the crater. The crater was several miles away by this time as the lava had been flowing for so long and no longer easily accessible on foot. The lava was hardened all around it into black lava but still several thousand degrees right below the surface! 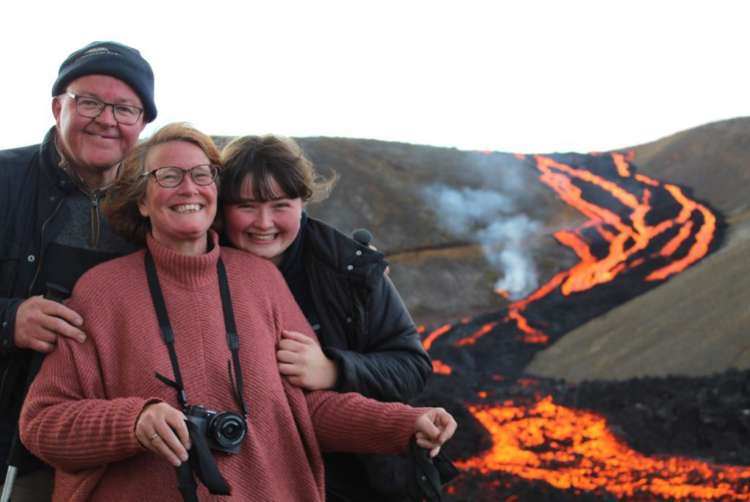 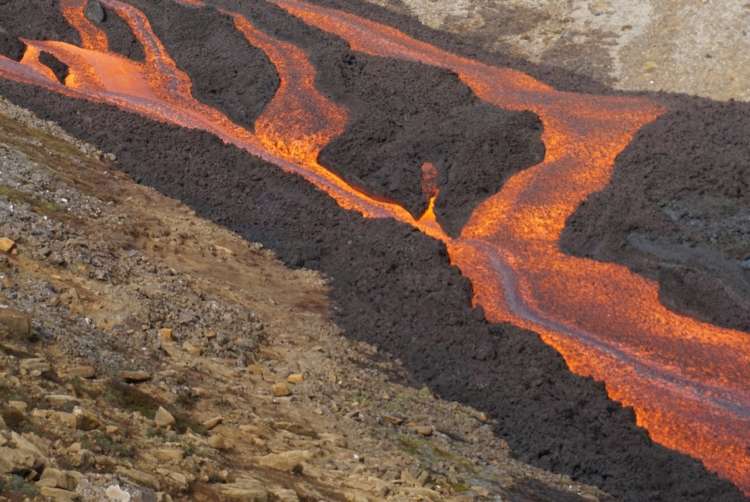 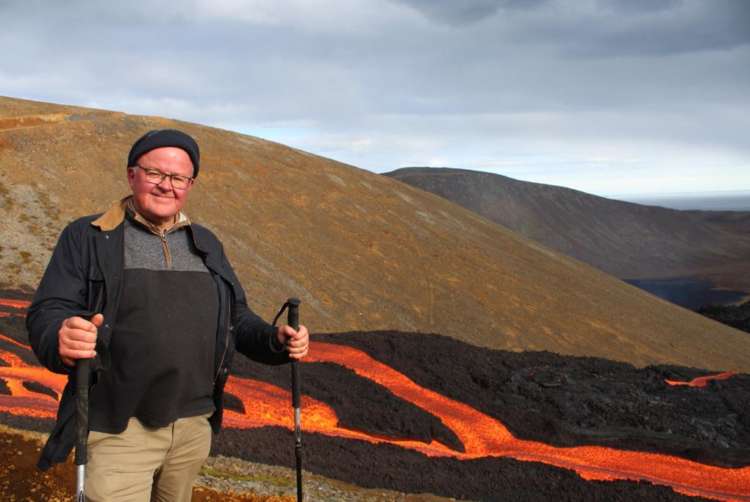 We spent hours exploring walking alongside the river of lava. Watching it as it flowed to the edges and slowed and hardened turning black and pushing the following flow in new directions. Sometimes the running orange red lava would push over the hard lava and then run creating a new lava river and path. We watched as it flowed right over the track exactly where we had been standing only an hour before!

We walked alongside it, and climbed up above it for a spectacular birds eye view, and walked below it to watch it coming towards us. Utterly mesmerising. There we were watching the newest part of the planet form right infront of us. It was mind-blowing! 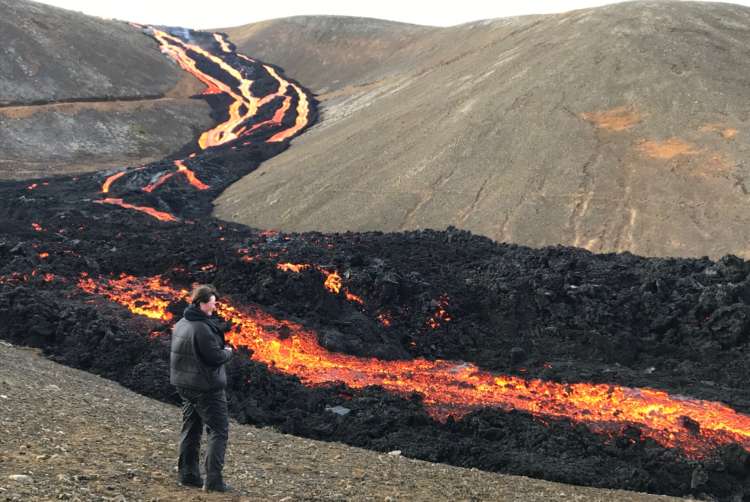 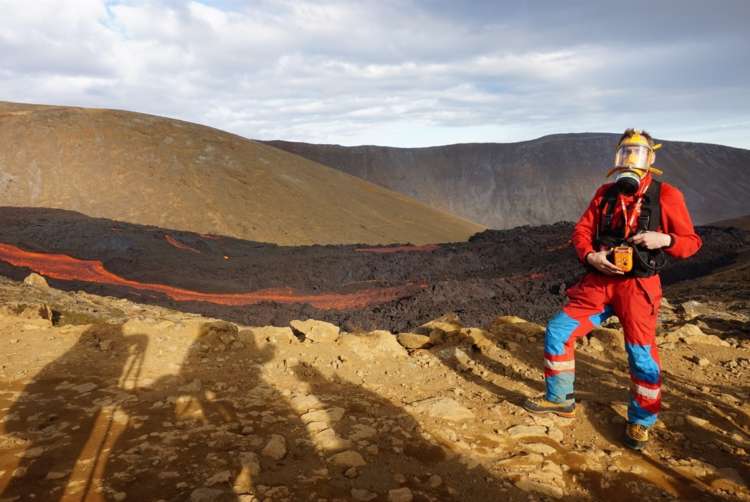 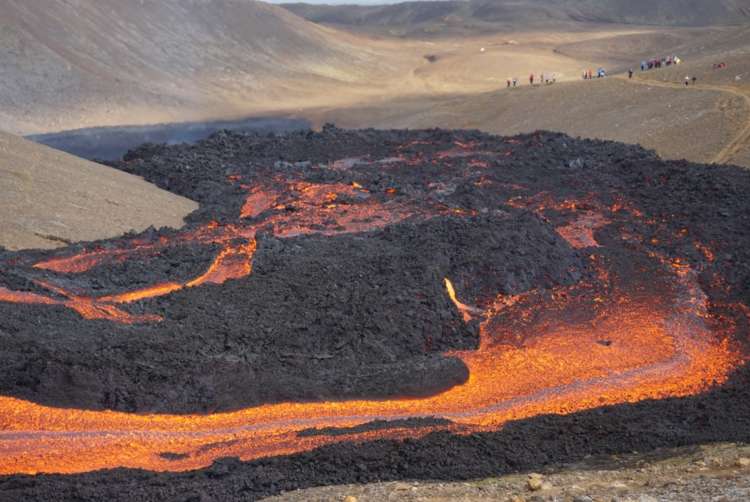 We were lucky as the day we were there it had just flowed over the hillside into our valley which meant it was moving fast and so was particularly impressive. On the surrounding hillside you could see the hardened black lava where it had flowed over a lip and then changed path or temporarily stopped, looking like a drip cake!

All the guides had gas alarms on them and when they went off they would move us along to ensure we kept safe. As it was so windy we hadn’t appreciated that there were any gases we had to be worried about as there was no smell. The Iceland Government also had marshalls with gas meters and gas masks patrolling to make sure no-one got into difficulty being gas unaware. There was a remarkable lack of people there and often we would find a spot with hardly anyone else in view. This really was a special experience. 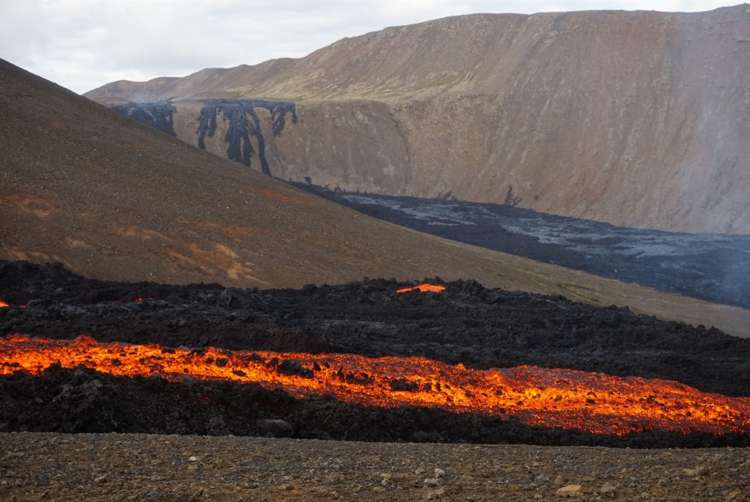 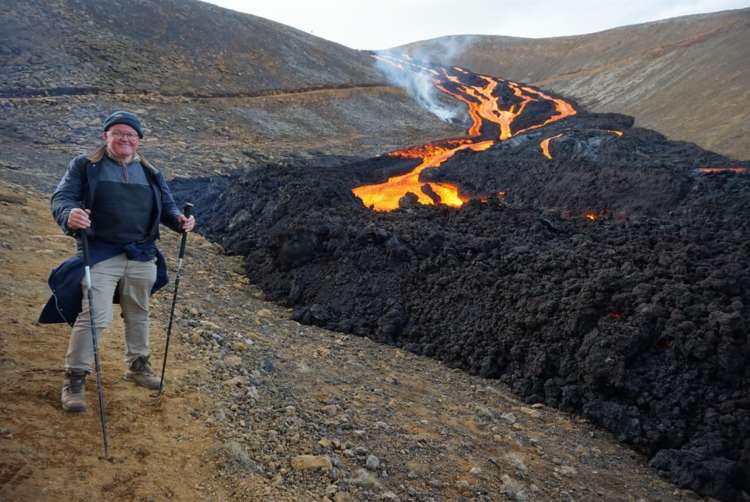 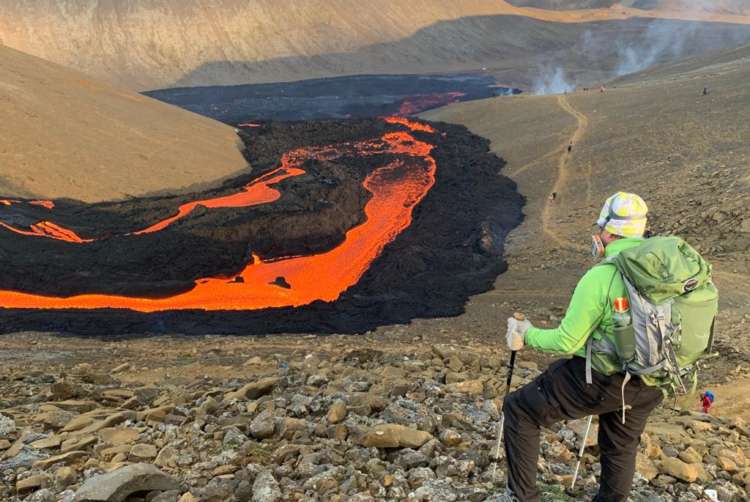 When we finally dragged ourselves away, now in the early hours of the night but still broad daylight, and made our way down the track an entrepreneur had set up a stall selling fresh fish and chips. Just the perfect end to an extraordinary experience.

To finalise our Iceland Holiday we managed to secure a spot on a helicopter and flew right over the cauldron. Boiling bubbling lava flung itself up inside. It felt that we were at a movie and that it couldn’t possibly be real. The orange and the red of the lava was so intense. The Helicopter landed on a spur overlooking the cauldron. The guide explained to us how the molten lava coming out of the crater was now moving underground through hardened lava tunnels before emerging outside further down the valley (as we had seen). All around us as far as we could see was black hardened lava. This was Mordur. There was no other way to describe it, and in my minds eye I could see Frodo, the ring-bearer, picking his way through. Dramatic black contrasting against the pastel yellow of the hillsides. Today it was completely silent and quite eerie.

Several weeks later the eruption stopped, and I will forever be grateful that we managed to get to see it in such a spectacular way. It is officially the longest eruption in Iceland in 50 years. We were so very lucky.

We now offer a day trip to the eruption site so you can explore the aftermath of the eruption and to walk right up to the hardened lava. In the area there is plenty else to see such as a seawater Geyser, the bridge between the tectonic plates of North America and Eurasia, as well as simmering mud pools, and lava pools. It’s a popular new addition on our Iceland Northern Lights Trips though in most cases requires an extra night in Reykjavik as the total tour lasts 7-8 hours with pick up from Reykjavik, and you do need to be physically able to walk @1hr 20 mins to the site. 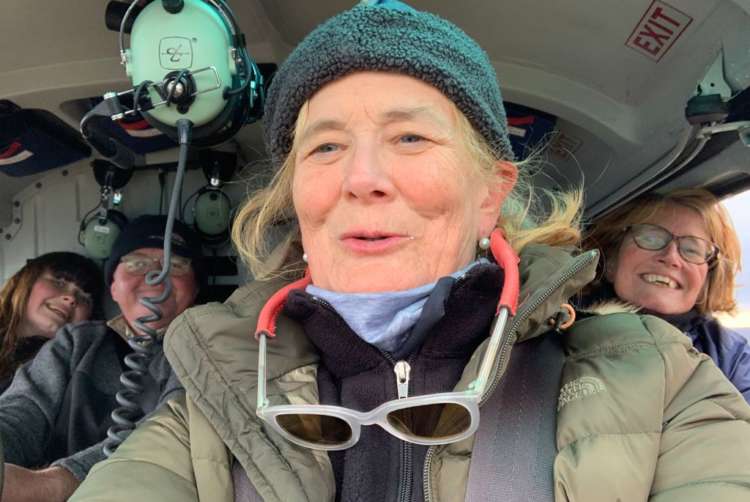 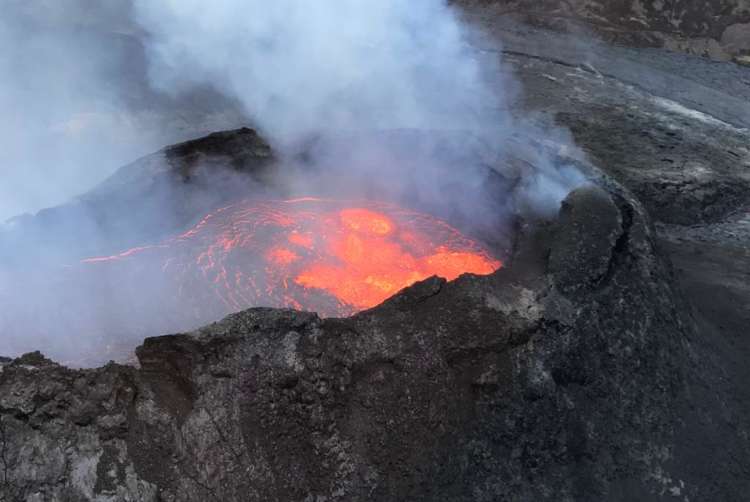 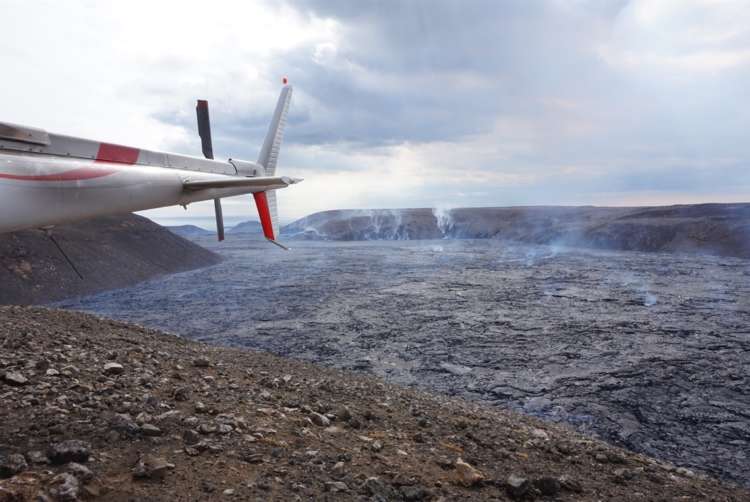 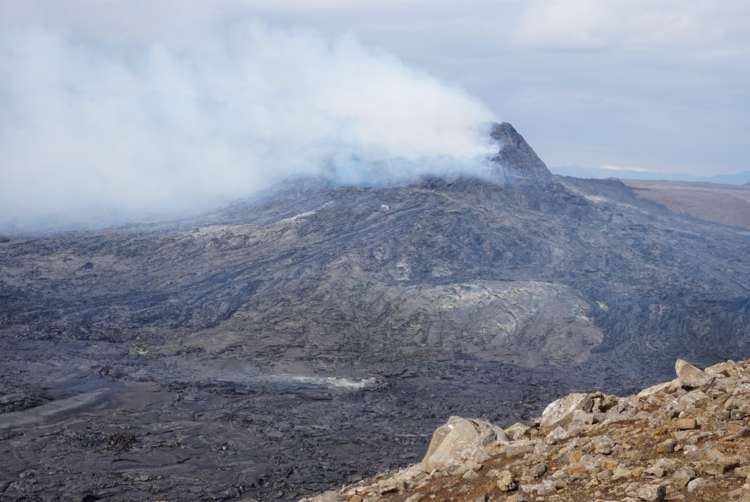 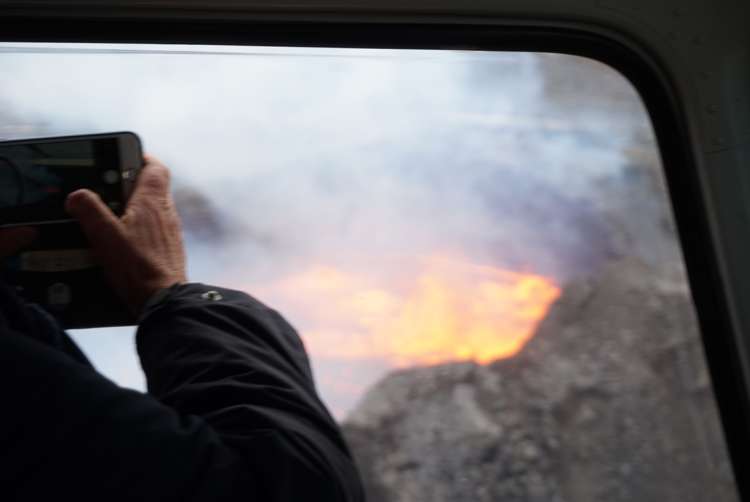 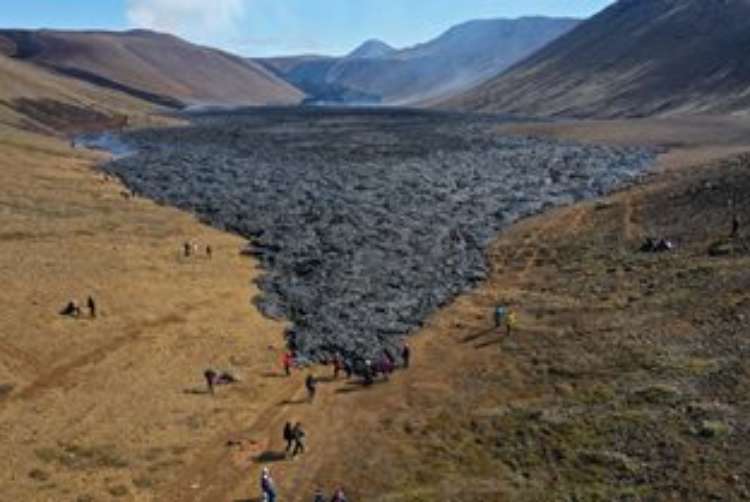