My connecting flight flew into Evenes Airport in Norway. I picked up the hire car (remembering to drive on the other side of the road) and started out. Initially I was a bit concerned about driving here as it had been a while since I’d driven abroad, but the roads were so quiet it wasn’t a problem.

It was late September and the autumn colours were amazing, although autumn had arrived early this year. I can only imagine how much more colourful it would have been had I travelled just a couple of weeks earlier. The scenery was stunning; a wow round ever corner is how I like to describe it! My first hotel was quite a drive away but there was plenty to see on the way.

After a good night’s sleep I then travelled to the Polar Park. It’s a lovely place set on the side of a very pretty valley with lots of autumn colour. Whilst there I saw reindeer, moose, Brown bears, wolves and Lynx. Afterwards I drove to Svolvaer, winding my way on near empty roads, over bridges and through some very long road tunnels with magnificent mountains and waterfalls on either side. The fjords were stunning, just like you see in the advertisements, and the water so blue and clear. 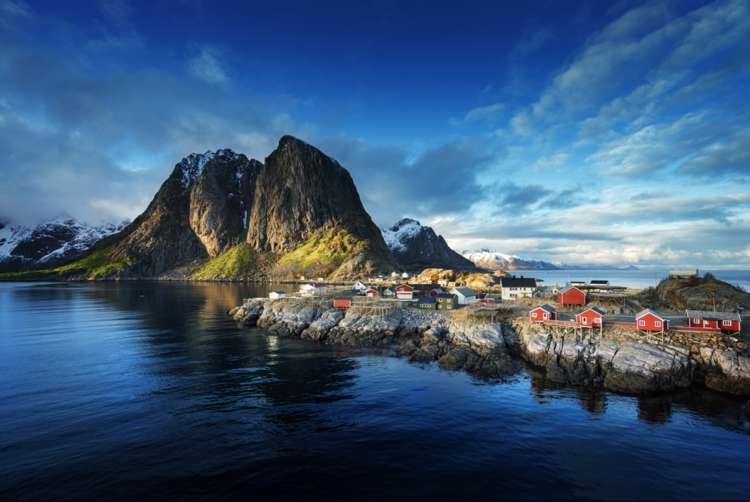 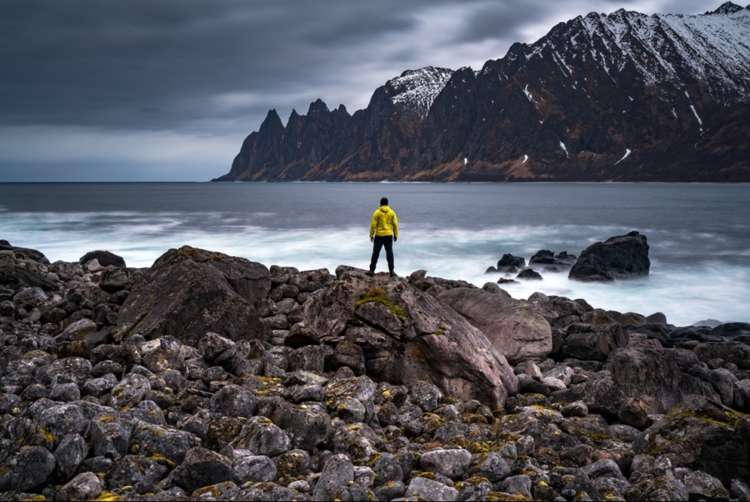 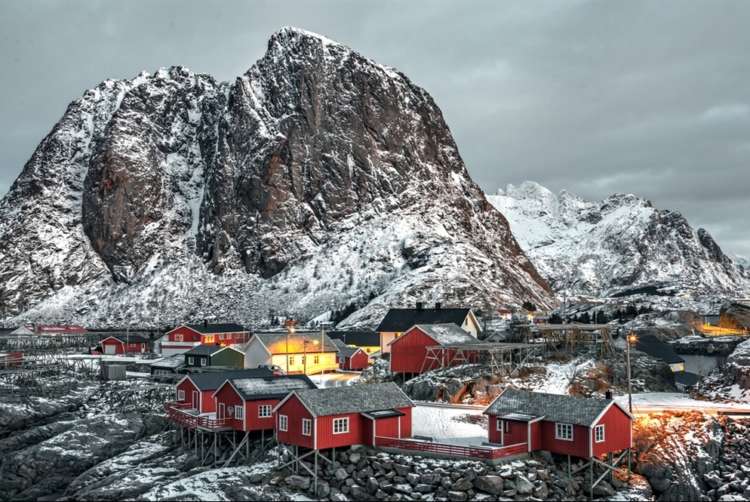 I stayed in a Rorbuer Cabin for the next 3 nights, a traditional fisherman’s cabin. I was pleasantly surprised; it was spacious, comfortable (very IKEA like) and warm; it even had underfloor heating in the bathroom, such a luxury! It had the most amazing view of Fløya (the mountain that forms the backdrop to the town) and the fjord. You could hear the water lapping round the stilts the cabin was built on and watch the birds scouring the shoreline for food. That night I had my first taste of Salt Cod, an acquired taste I must say. The restaurant attached to the cabin complex has a reputation for this local delicacy; in fact the whole complex has many drying racks, now empty as it was out of season for the cod catch. It was absolutely jam packed as it was a Saturday night and I would definitely recommend booking in advance as it’s quite a small restaurant and you wouldn’t want to be disappointed if Salt Cod was your thing!

Breakfasts were lovely and I was encouraged to make a picnic to take out with me each day. This was very welcome and thoroughly enjoyable eaten by the side of fabulous fjords and waterways. Some of the bridges between the islands are amazing too; huge curved suspended roads but with the most awesome views. The roads have steep channels either side meaning they look as though they are raised up from the surrounding land and poles stick up along the way. The poles apparently are telling you where the edge of the road is when there’s snow!

It snowed whilst I was there and the changes to the scenery were dramatic. There were even more waterfalls for a start and the mountains looked like they’d been sprinkled with icing sugar!  I even saw a glacier, a sight I never thought I would see.

One morning I had the most amazing Rib Boat ride to see the Sea Eagles. It was very cold and very wet but absolutely exhilarating. The Sea Eagles fly right above the boat, they’re huge birds and so regal. I was so glad when we got back to pop into a local café for a nice hot drink to warm up. 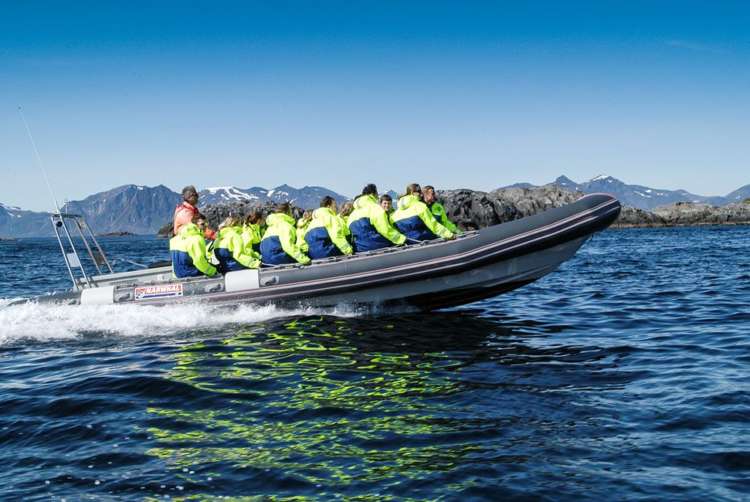 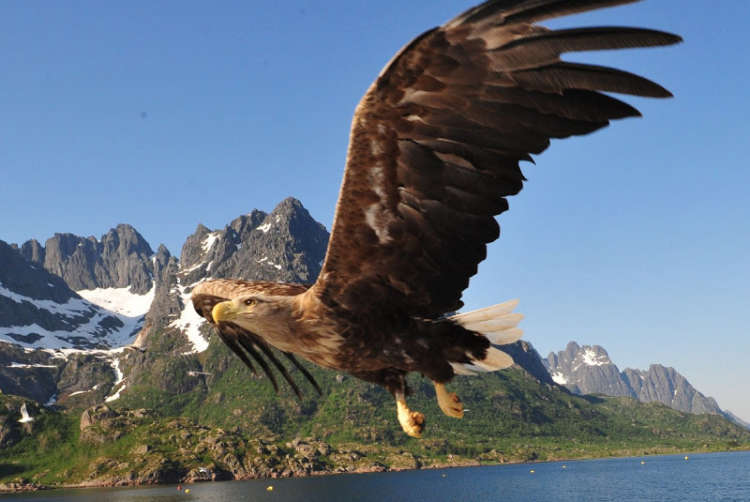 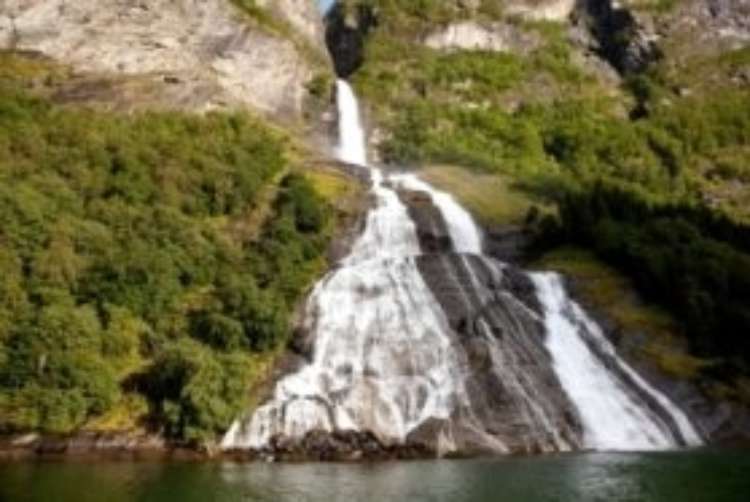 I also managed to get to the Viking Museum. It’s a great place to visit with some really interesting archaeological exhibits and an audio guide to tell you all about them. Inside the longhouse (an authentic reproduction of the longhouse which was found on the same site) there are sections depicting the many handy crafts which would have been around at that time. From bowls to embellishments, and weaving to tool making, a fascinating and informative display.

One night I went out with a local Northern Lights guide. I’d had a look and the forecast wasn’t very promising but the guide thought he knew of a place where we might just get lucky and see them. It was very cold and cloudy and initially I thought I had wasted my time. However, after a couple of hours my patience was rewarded with the most stunning, dancing, white Northern Lights. The guide was very pleased with himself and I was so happy to have witnessed them!

I had the most wonderful time in the Lofoten Islands. The scenery is stunning, the food amazing and the people so hospitable. My advice if you’re going there, take your time … there’s so much to see and do. See our recommended break to the Lofoten Islands